“YOU DON’T HAVE TO BE GREAT TO START, BUT YOU HAVE TO START TO BE GREAT” 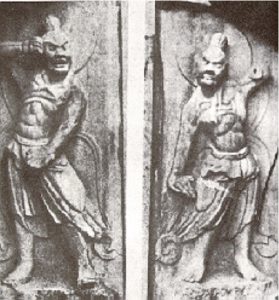 Korean Martial Arts had their beginning centuries before the birth of Christ, and developed a great many kinds of weapons. Every weapon used in combat was included as part of the soldiers over-all military training. In addition to those complex skills, advantages and possibilities of the body’s natural weapons were not overlooked, and the skills of unarmed combat were also emphasized. In this manner a branch of military science based upon the natural weapons fists, hands and feet was established. First known as Su Bak and then, over the centuries, called Kwon Bup and then Tae Kyon, it was a vital part of a warrior’s training. The name Tae Kwon Do was chosen in 1955 by a group of leaders in the art, and it was officially adopted by the Republic of Korea in 1965.The history of Korea is very long and exciting as is the history of Tae Kwon Do. The legendary soldier-king Dongoon forged the various tribes into a unified kingdom 23 centuries before the birth of Christ. This kingdom, founded at the high point of Egyptian history and centuries before the Roman Empire was founded, lasted more than twelve centuries.Next, the three kingdoms emerged-Koguryo (37 BC – 668 AD) located in southern Manchuria and northern Korea; Pakje (18 BC – 600 AD) along the Han River and in southwestern Korea; and the Silla (57 BC – 936 AD). Archaelogic findings such as mural paintings on the royal tombs of the Koguryo dynasty, the stone sculptures of pagodas of temples produced during the Silla period, and documents written in the Pakje dynasty show many studies of fighting stances, skills and formalized movements that closely resemble the present stances and forms of Tae Kwon Do. Therefore, it can be inferred that people in the three kingdoms practiced an art very like the one we study today.

In the southeastern part of the peninsula about 670 AD Silla reunited the three kingdoms and held control for three centuries. Korean culture and martial arts of the period strongly influenced and enriched by the Hwa Rang Ro, a military, educational and social organization for noble youths started by King Jin Heung, of the Silla Dynasty. The influence of the Hwa Rang Ro played an important part in unifying the three kingdoms once more. The code of honor on which the group was based was loyalty to the nation, respect and obedience to one’s parents, faithfulness to one’s friends; courage in battle and avoidance of necessary violence and killing.

Many scattered escriptions in written documents of the three kingdoms show that the Hwa Rang Ro not only regarded the studying of unarmed combat as an essential part of physical and military training, but they also recommended it as a recreational activity.

Koryo Dynasty ( 935 AD – 1392 AD) In this dynasty, unarmed combat study gained its greatest popularity, and it was practiced both by military personnel and the general public. It was the period that the science was first technically organized and systematized by the leading masters. Military officers and masters were invited by the royal family to present demonstrations and matches annually at the royal court.

Yi Dynasty (1392 AD – 1910 AD) On August 2, 1910 the Yi dynasty was forcibly overcome by Japan and the Japanese colonial government banned not only cultural activities, but also team sports and the martial arts. In 1943, Japanese karate was introduced into Korea for the first time and it gained in popularity until Korea was liberated on August 15, 1945.

Several leaders in martial arts opened dojangs (martial arts schools) under various names such as Kong Soo Do, Su Bak Do, Tang Soo Do, Kwon Bup, etc. Many instructors, however, wanted to return to the traditional Korean forms of unarmed combat. The Kyon, the first conference held for the purpose of unifying the dojangs and standardizing instructor’s methods was held in July, 1946 without success, but attempts to unify the different martial arts styles continued. In May, 1973, the World Tae Kwon Do Federation was organized under the leadership of Dr. Un Yong Kim. Currently this federation has 178 national member organizations. Recently the World Tae Kwon Do Federation became affiliated with the General Assembly of the International Sports Federation (GAIF). Thus Tae Kwon Do has become a truly international sport.

In 1973 and 1975, the first and second Tae Kwon Do Championships were held in Seoul, Korea. The international Military Sports Council (CISM) has officially recognized Tae Kwon Do as an official sport and has been added to their list of events.

The Philosophy of Tae Kwon Do

Tae Kwon Do is not just training in kicking, punching and self defense. It is far more even than training in mental/physical coordination. A major feature of the art is the development of a certain spirit which carries over into all aspects of life. If there exists a means through which one could secure a stable, peaceful life, it would have to be based upon a harmony between oneself and nature. Do in Korean means “art,” “path,” “way,” “way of life.” It is the way in the universe. The philosophy of Tae Kwon Do has as its roots many of the tenets held by religious masters and devout laymen throughout history. The qualities can be traced back to the influence of Buddhism, and its aim of the “Mastery of Life.” Buddhism, introduced to the Koguryo kingdom in China in 347 A.D., contributed greatly to the growth of the Korean martial arts. The focus of Tae Kwon Do philosophy is to offer a means by which the student can rid him/herself of the ego, or what Zen-Buddhists call “discriminating mind,” in order to live in harmony with the universe.
At the core of this philosophy is the concept of ‘duality’ in nature. Duality refers to the interaction of opposing forces. Harmony is achieved when opposite forces are distributed equally, resulting in balance. When one force dominates however, discord is the result. For example, when an adversary uses positive (aggressive) energy, or in other words initiates an attack, the defender should use negative (yielding) energy to respond, by stepping aside to allow the energy of that attack to flow past harmlessly. In this manner, what was once hard (the assailant’s attack) becomes soft (non injurious), and what was soft (the defender’s passivity) becomes hard (an effective way to counter a potential dangerous assault), allowing balance to return.
Ultimately, the philosophy of Tae Kwon Do seeks to bring students to a level of consciousness known as “Present Time.” This occurs when one is completely in tune with oneself and nature to the degree that ones actions and reactions are always perfectly coordinated with the forces in life whether that be in the sparring ring, in a social setting or even when alone. Such a person cannot be made upset by anything it encounters in life. True masters of Tae Kwon Do are noted for their serene personalities, which stem from their living in Present Time.
Every person is capable of coordinating him or herself with the forces in life more perfectly. By centering oneself and balancing the dual forces through living in “Present Time,” students can begin to touch the true goal of all human life which is the aspiration to and application of perfection.